The race is about to begin. First appearing is the crowd favorite, Grace, followed by Flapper, Goldilocks and Ella Mae. More flock in, but they’re crowding and bunching up at the back.

Someone in the know, standing next to me, identifies the late entries as Unicorn, Mushroom, Shorty Long and Crocodile Eater. The names alone are worth the wait.

The chickens are gathering to run an obstacle course. The obstacles resemble jumps for horses, but on a small poultry scale and with PVC pipe instead of wood. Imagine a small Ninja Warrior course for chickens and you’re close.

The course was originally constructed, with the jumps set higher, for a black lab. Sadly, the dog disqualified himself by repeatedly and gleefully knocking down the obstacles instead of bounding over them.

Undaunted by failure, the trainer, who just turned 13, lowered the bar (literally) and took to training chickens.

Her lure for the chickens is a peeled banana. Who knew, right? Chickens like bananas. They like them so much they will run an obstacle course in hopes of winning teeny tiny bits of banana.

The race is about to start when yet another chicken crashes through the brush and bobs onto the course.

The crowd cheers and does the chicken dance as Nest in Lap joins the competition.

Silence falls, the trainer lowers the banana and the race begins. Competitors cast beady-eyed glares, shove, push and wing bump one another in an effort to hurdle, or hop, PVC pipes. 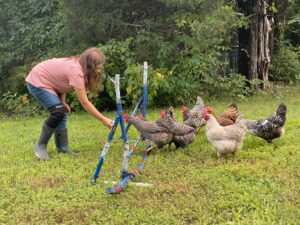 Shorty Long takes the lead, trailed by Mushroom and Flapper. They both take the first jump with the pipes on the ground. Halfway to the second jump, Mushroom surges ahead and delivers a beak blow to Shorty Long’s midsection. Shorty Long and Mushroom tussle. Feathers fly. Flapper seizes her moment, overtakes them both and clears the second jump.

Mushroom recovers (though hen-pecked), scuttles to the front and is now neck-in-neck with Flapper at the final and most difficult jump, which features a PVC pipe at the base of the jump and a second pipe suspended four inches above ground, resting on notches cut into two tree branches driven into the playing field. Make that laying field.

The crowd falls silent. Which one will have the hen-durance? Mushroom hops over pipe No. 1 and onto pipe No. 2.  She teeters, falters and hits the ground.

It looks like Flapper is about to seal the win when Ella Mae surges from the brood, her claws kicking bits of sod into the air. She delivers a wild wing (hold the Buffalo sauce) to Flapper who takes a fall. Ella Mae balances precariously atop pole No. 1, eyes on the prize. She steadies herself, takes a leap, goes airborne and clears the pipe suspended above ground.  Ella Mae has won the banana! The crowd goes wild!

Eight of Ella Mae’s closest hens, all void of sportsmanship like conduct, close in on her and the spoils. The trainer basks in the adoration of spectators and murmurs spread of Ella Mae going pro.