If you have a newer top-load washing machine, you know that it helps to have the height of an NBA player to reach in and retrieve the clothes.

You’re at a serious disadvantage if you’re on the short side. I can reach clothes in the bottom of our washing machine with the toes on my left foot still touching the ground, but barely, and I frequently bruise my rib cage.

On the upside, I’m now one inch taller than when we had a front-load washing machine. Even more impressive is that my right arm, the one I stretch to reach the wet clothes, now hangs one foot longer than my left arm. 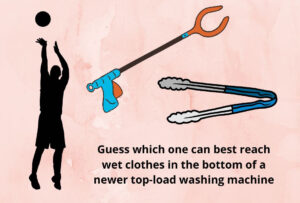 I was at one of our daughter’s homes the other day when she told her youngest to move the laundry from the washer to the dryer. Their machine is a newer top-load also, but even bigger, with a deeper tub because they do a greater volume of laundry.

I watched carefully to see if she had a technique I could implement.

The first thing she did was kick a step stool to the front of the washer. I’d considered a step stool, but I also considered that my center of gravity could tilt, and I could fall into the machine and not be found until the next load of dirty clothes.

She gingerly jumped up on the stool (I don’t do anything gingerly anymore), hoisted herself up on the washing machine (I do still jump onto the countertops), balanced her midsection on the rim of the machine, teetered a bit, steadied herself, then went for it.

She dove headfirst. Her legs shot up at a perfect 45-degree angle. It was fantastic form and should probably be incorporated into a domestic Olympics: The Top-Load Washing Machine Deep Dive, the When-Your-Hands-Are-Full Refrigerator Door Kick and Speed Competition For Unloading The Dishwasher.

Five seconds later, she popped out of the machine cradling an enormous load of wet towels to her chest and grinning from ear to ear. I jumped to my feet, cheering, clapping and yelling, “Go for the Gold, sister! Go for the Gold!”

She dove in two more times and emptied the machine. The girl has moxie.

BBQ tongs and a grabber have failed me, but this child has given me hope. Sometimes you’re just so proud of your family, you could cry.