We witnessed the passing of the drums last weekend.

It was a momentous occasion and not just because they were passed down from the attic over the garage, although that was dramatic. I was instructed to remove the extension ladder that had gotten the husband into the attic once he stepped onto support beams.

Per instructions, I then moved a stepladder into place and climbed up with arms in catch position as he tried to force the bass drum through the attic opening. Meanwhile, grandsons smart enough to know a disaster in the making when they see it, positioned themselves to catch the drums if, when, and most likely, I lost my grip on the bass.

They intervened and were bearing the weight of the large drum before I could lose my grip. I choose to think they were more concerned about their grandmother than the drum, but I have no intention of giving them opportunity to confirm or deny that. Why ruin a happy thought?

The kids immediately set up the bass, snare, tom drum and cymbals in the family room. I’ve not seen that on HGTV, but maybe I can send them the idea.

The banging began immediately. It was deafening, but oddly comforting – a blast from the past.

The husband was a drummer. His ‘60s blue and silver Slingerland drum set was the major piece of furniture he brought to the marriage.

We raised a drummer. For years the roof shook, the windows rattled and the walls rolled. Our son practiced after school and every bone in my body wanted to run upstairs, fling open his door and scream, “STOP! JUST STOP!” 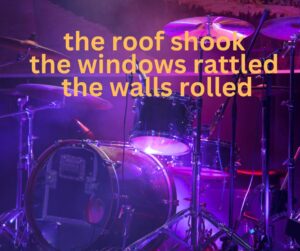 But we were paying for lessons. We paid someone big bucks for the kid to dismantle our nervous systems so he could play in a high school jazz band.

And orchestra. All the kids had to take orchestra.

Do you know what it’s like when your kid plays percussion in the orchestra? Your kid goes to practices and rehearsals, you clear the family calendar, you clean up, you drive to the school and you find a seat in the auditorium.

The curtain goes up and there’s your kid. He’s going to play the timpani, so he’s at the far back corner of the stage. You’re pretty sure that’s him but he’s far away and in the shadows so it’s hard to tell.

And now the drum set that belonged to the husband and was used by our son passes to our son’s children.

We needed two vehicles to haul the kids and the drums home. We set them up and within seconds the roof shook, the windows rattled and the walls rolled. History really does repeat itself.

We declined an invitation to stay for dinner. We wanted to get going before our son and daughter-in-law had a chance to change their minds and tried to catch us. 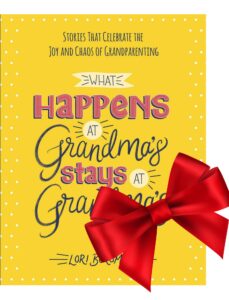