This is the week I move to the top of the leader board in a Fitbit competition. This is exciting because when you are of a “certain age” others begin to count you out and there’s nothing like being counted in. Especially if the “in” is in first place. 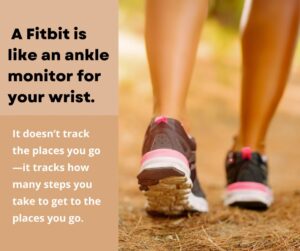 This little high-tech watch has an algorithm that counts your steps based on motion patterns like swinging arms.

Sometimes I add steps to my daily count by swinging my arm to my mouth with pistachios. Talk about a win/win.

Four family members who compete with one another invited me to join their group—our youngest daughter and three grands 12, 12 and 10.  They consider 10,000 steps a day (about 5 miles) bare bones. I think they wanted me in the competition to boost their standings. And I did for awhile.

I lingered in last place because I would charge the Fitbit and forget to put it back on. Other times I forgot to update my step count in the app.

But now, like many Fitbit wearers, I am obsessed with counting steps. I’ve stepped up my game. Literally.

I moved into fourth place.

Then I began walking while talking on the phone—and emptying every trash can in the house multiple times a day whether they needed it or not.

I pulled into third.

I began walking a half mile to the corner drugstore to pick up miscellaneous items instead of driving. I extended my route on a trail I frequent and closed in on second.

I could taste victory. It smelled a lot like stinky tennis shoes.

With first place within reach, I started shopping only a few items at a time because Fitbit won’t track steps when you have both hands on a cart. Sometimes I’m in and out of the grocery so frequently that security follows me.

I was closing in on first place and hit a huge roadblock—one of the 12-year-olds started cross country with practice three times a week followed by a meet. We were all toast now. There would be no way to catch her.

And then it happened. I broke through. I outpaced the cross-country runner and took first place. I confess it wasn’t determination on my part as much as it was timing.

The kid was trapped in a car on a 12-hour trip with her family.

I hope she doesn’t ask if she can walk home.

The thrill of first place has been overshadowed by the realization that Fitbit controls my life. I may need rehab. Preferably a 10,000-step program.