My little black coat is simple—knee length with five buttons down the front. It’s your basic snowman model. The lining in both arms is shredded. The coat is 22 years old.

Our three kids graduated from high school rapid fire. There were two years when all three were in college at the same time.

An acquaintance, who knew what was ahead for us, asked if she could give me a piece of advice. “Get yourself a good winter coat now,” she said, “because you’re not going to get another one for a very long time.”

So I did. And I have hung onto that little black coat the way a baseball player keeps a glove from a spectacular catch, or a football player holds onto a jersey from a championship game.

That little black coat is a testimony to victory. 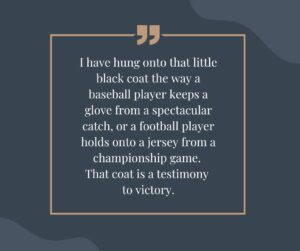 To this day, I’m not sure how we maneuvered three kids through college, but we did. Everybody worked. There were summer jobs at Bed, Bath and Beyond (that daughter learned about sheet thread counts and is certified in “lifting”), a lawnmower with roughly 10,000 miles on it (our son had a couple dozen customers), endless babysitting jobs and jobs at a nursing home and a hospital.

Our son likes to say that a robbery took place at the end of every summer. We wouldn’t call it a robbery, necessarily. We thought of it more as a “buddy system.” Everybody contributed their earnings to college expenses.

Similar scenarios have played out in hundreds of thousands of homes across the nation.

Statistics vary on how many Americans over the age of 25 have graduated from college, but most hover in the neighborhood of less than 40 percent. Why should 60 percent of the population that didn’t go to college be forced to help pay the bill for those who did?

Even more aggravating, why should those who honored the legally binding contracts they signed, and paid off their student loans, now pay on someone else’s loan?

You don’t expect others to help pay off the VISA or Mastercard at the end of every month.  You don’t take out a home improvement loan, remodel the kitchen, then ask, “Who’s in?”

No magic wand can ever erase a debt. The debt will continue to exist and simply show up elsewhere.

Three guesses where this one will show up.