Facing fierce competition in the job market, prospective employees are shelling out $1,000 for a professional headshot hoping to gain an edge.

Apparently the “right” headshot can put you ahead of the pack. It should be an easy sprint to the front with your wallet being so light.

Headshots with smiles are now questionable, even ill-advised in some circles. Pity all that money spent on orthodontia and caps. They should have saved it to pay for the $1,000 headshots.

I also can’t help but think of the line in the musical “Hamilton” where Aaron Burr advises a young Alexander Hamilton, “Talk less; smile more.” If only Hamilton had listened. He could have lived a lot longer. 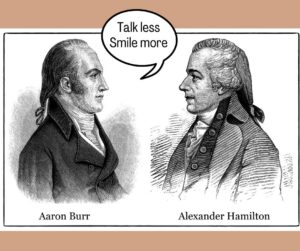 A number of these pricey headshot sessions come with “face-coaching.”

I don’t know about you, but I could use a face coach.

I have a face that often responds before my mouth does: furrowed eyebrows, the look of shock, the squint that says, “I’ll probably fact check that later,” and the standard eye roll that has been getting me in trouble since age 7.

Although as a parent and grandparent, rapid-response facial communication is extremely useful. You don’t say a word, just give the “I wasn’t born yesterday” look. Or the “Sell it to someone who’s buying” look. It’s high-speed, efficient communication.

The husband could use a face coach, too. I often get a deadpan look from him in response to things I say. He doesn’t have to truly be engaged, but it would be nice if he could make his face look like he was engaged.

Face coaching leans heavily toward the somber side. Many of the coached headshots have a look that says, “I’m serious, but a go-getter. I’m listening, but I have ideas of my own.”

Some of the facial expressions are pensive and penetrating, nearly brooding, deep in thought, intensely reflective. More than a few could be mistaken for depressed poets.

Not that there’s anything wrong with that; depressed poets make a lot of money. But it could be a problem if you’re applying for a business management job. Then again, maybe you could combine the two—quarterly reports in free verse.

I can’t imagine what budget-minded job seekers do in these times. There are always those photo booths that take four pictures rapid fire then shoot them out a slot. No, of course not. Forget I mentioned it.

Then again, it could set you apart from the pack.

Let me know if it works.

I’m taking Aaron Burr’s side in this one: “Talk less; smile more.”