When our twin grandbabies were chubby-cheeked toddlers and would spend the night on two little blue cots, they often requested a “back-a-rub” to help them fall asleep.

The husband or I would sit, kneel or crouch on the hardwood floor between the two cots with arms outstretched simultaneously giving a back-a-rub to each twin.

The tots would be just about asleep and the adult giving the back-a-rub would be sound asleep, but somehow still upright, when a burning pain would shoot down the adult’s shoulder or a horrible muscle cramp would seize a calf. Instinctively, jumping up for relief and yelping in pain woke the little ones and terrified them, which they communicated by screaming and crying at high decibels. Sometimes for hours. Or maybe it was days. Who knows. High-frequency crying on dual speakers can destroy memory as well as hearing.

On a good night, we sometimes got ourselves to bed three hours before the sun rose.

Those twins are now preteens, No. 2 and No. 3 in the lineup of 11 grands. As they grew older, they gave back-a-rubs to their baby sister and to their younger cousins, who in turn gave back-a-rubs to their siblings and cousins. Eventually, it came to pass that an adult could be at the kitchen table doing a crossword or finishing a meal and feel a light pressure on the back as though perhaps a butterfly had landed on you. But as you reached to brush it away you discovered a small person giving a small back-a-rub.

As many of the kids grew taller and could reach higher, the back-a-rubs morphed into neck-a-rubs. A neck-a-rub is wonderful during tax season or deciding whether to make a triple jump and crush a 6-year-old at checkers or let the kid win. (Take the jump—always take the jump! They’ll crush you soon enough.)

A competition developed among the kids as they worked the crowd of weary aunts and uncles and aging grandparents, giving neck-a-rubs, and hoping to be the one showered with the highest praise. 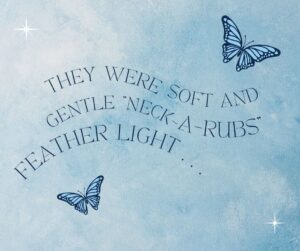 When you are the last in a long line of 11, it is not easy being a quiet observer, watching others constantly glory in the spotlight. And so No. 11 began weaseling into chairs behind an adult, or wedging herself between someone’s back and the sofa cushions, to give neck-a-rubs.

They were soft and gentle neck-a-rubs. Feather light. Such a sweet little bug, that one.

Showered with accolades for her marvelous neck-a-rubs, No. 11 upped her game. Her neck-a-rubs became a bit more intense, then downright nerve-pinching intense. This, too, drew comments and she upped her game ever more.

These days her chubby fingers often move from the back of the neck and wrap around the front of the neck as she shakes your entire head. Glasses fly off faces, stands of hair whip the eyes, and you have triple vision as your head bobs back and forth.

If you stop by and No. 11 is here and demurely asks if you want a neck-a-rub, do what we do. Say no thanks but offer to play checkers. The pain is far more endurable.