I sent an email to our girls and our daughter-in-law a few weeks ago saying it might not be a bad idea to stock up on staples again.

Crickets. Not a single response.

Late that evening, I received a text from our oldest daughter saying, “Now I get it! I thought you meant staples, like paper clips and rubber bands. I thought, why would we need those?”

Unreal, I thought. And I thought it out loud.

I asked her sister if she got my email about staples and what she thought it had meant. She, too, thought I meant staples for a stapler but didn’t want to say anything because she figured I was having a “Mom Moment.” 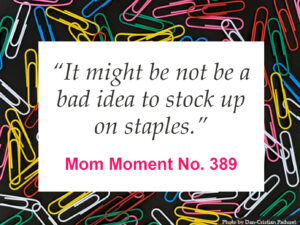 First of all, I didn’t know they talk about me having “Mom Moments.” Secondly, why would a “Mom Moment” constitute going to Staples to buy staples?

They’re bright girls. You’ll have to take my word on that.

That’s out of date, too.

Archaic words and phrases make for a steep and slippery slope. Help! I’m falling and I can’t get up.

I have a browser tab set to the Merriam-Webster Dictionary and not just so I can waste time repeatedly taking vocab quizzes until I can place in the top 10 percent. M-W.com is highly educational. Awhile back, they featured words that are no longer used. Among them were britches, gallivant, slacks, smitten and swell.

I still use gallivant and smitten and I’m going to keep using them. They’re staples. To my hipster credit, I quit wearing slacks years ago and switched to pants, although you wouldn’t know because they look exactly the same.

I have a friend with so many idioms I keep a computer file on her. She says things like, “I tell you what, that man has more money than Quaker has oats.”

Wouldn’t it be swell to know someone like that? You could gallivant around the world.

If there is unpleasant business ahead, she’ll say, “I’d rather have a spankin’.”

She might, but she should hike up her britches and keep moving.

A friend’s father talks about people “getting all fizzed up.” That’s a good one, too. He got it from his father. The man still using the phrase turns 96 this month.

The girls now understand that I meant pantry supplies (worked in another oldie), not office supplies, when I mentioned staples. I told them not to get all fizzed up about it.