It has been said that if you don’t have a good meal on a holiday, you probably have a good story.

I was in a fowl mood before Thanksgiving. Tired of cooking turkey, I opted for Cornish hens. The recipe I was using finished off the hens by cooking juices from the roasting pan with white wine.

Turns out the hens could have finished off the family.

We began eating and it was obvious the hens were undercooked. Not one to overreact, I yelled, “DON’T ANYBODY EAT THE CORNISH HENS!” and lunged for plates on the table.

The husband stuffed a roll sopped in the sauce into his mouth and said, “Bud id daste dood.” I grabbed for his plate. He blocked me with his shoulder and dragged the roll through sauce a second time. I grabbed his arm to keep the bread from entering his mouth. One of the girls swept in from the side and pried his plate from his grasp.

The hens returned to the oven and we returned to a disheveled table. There was still sausage and sage stuffing. The top was burnt black because someone cranked the oven to 400 to finish off a pie crust. The stuffing was “good, but tough.” The green bean casserole, now cold and short on liquids, had congealed.

We’d eaten some of the sweet potatoes earlier in the week, having forgotten they were for the holiday. There was only one for Thanksgiving dinner. I sliced it thin and garnished it heavily, but it still looked alone and afraid on the plate.

The crescent rolls were good. I hadn’t made those.

The hens were finally fully cooked, but I no longer trusted them. As they had foiled me, I foiled them and dumped them in the trash.

Meanwhile, the husband texted everyone a picture of our turkey from last year. It had been bacon wrapped in a basket weave. 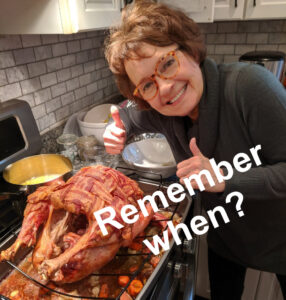 He said he was trying to remind everyone of tastier times. He also asked if he had eaten sauce with undercooked juices, how long before he’d be feeling the effects?

Ina Garten, cook extraordinaire and host of her own cooking show, tells of a friend who put a turkey in the oven, then went for a walk. She came back and went to check on the turkey, but the oven door was locked. She had set the oven to clean.

I’d like the story better if it happened to Ina.

A home economist and extension agent in Ohio received a call from a gentleman wanting to know how long a frozen turkey could be safely used. The extension agent said a turkey that has been continuously frozen can safely be used indefinitely, but the taste could be affected. “Oh, I don’t care how it tastes,” the man said. “I don’t like these people anyway.”

I like my people. And I’ve left a bad taste in their mouths. Literally.

It will just be the two of us for Christmas. We’re having ham.