The husband regards expiration dates on food as a mix of sheer fantasy and mathematical improbabilities.

The man has a hard time believing any food ever truly goes bad.

He’s from the “Waste Not, Want Not School,” which is why we have a tiny takeout container holding two tablespoons of honey mustard salad dressing that accompanied half of a salad I got in a takeout order, a small bowl housing four strands of spaghetti with a smattering of marinara from a long ago dinner, one leftover barbecue rib that is so old I have no memory of when we last had ribs and a box of cottage cheese that expired four days ago.

The husband interprets, “Use By” to mean somebody wants you to buy more of something sooner than you need to. From your wallet into theirs.

He considers “Use Before” to be the random guess of some number cruncher lounging behind a desk.

He reads “Best Before” and takes it as a personal challenge to throw caution to the wind. 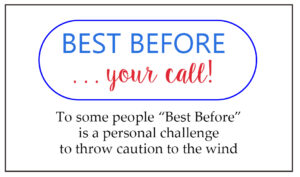 Unfortunately for me, he is often more right than wrong. Many of those stamped dates are more guesstimates than anything. Still, as the willy-nilly in the house—and being from the “I Don’t Want to Get Food Poisoning School of Fear”— I’m more likely to believe the guesstimates than to challenge them.

The husband has been known to throw his body between me and expired food when I attempt to clean out the ‘fridge.

He doesn’t even know which remnants of food are in my hands, but his clairvoyant food expiration powers tell him they are still good.

Often times, he’s not even in the same room or within view of what I’m doing—it’s simply an auto response when he hears the refrigerator door open or sees the little light go on in his peripheral vision.

“Don’t throw that out! I’m going to eat it tomorrow!” he calls, glued to his computer screen.

Like he has a detailed schedule of the foods he plans on eating over the next few days.

Even when the man does think something may have gone bad, he will need at least one and possibly a second confirmation before he can throw something away.

“This might smell funny,” he says, waving a gallon of milk under his nose.

One of the kids stops by and he says, “Hey, smell this milk, would you?”

But wait. It gets better.

Sometimes he’ll take a drink of the milk and say, “Yep, I think it’s going bad. Here, you taste it.”

When in doubt, throw it out!