One of our granddaughters just asked if I knew Merriam-Webster announced their word of the year.

“Wonder why they chose that?” I muse.

“Are you kidding?” she yells. “The price of gas! What else?”

“Gaslighting has nothing to do with the price of gas,” I say.

We race to the computer (it’s a highly competitive family), go to the Merriam Webster website and begin reading about gaslighting. Her eyes light on an opening paragraph, which she quickly skims. “It says right there ‘2022 saw a 1740 percent increase—’ ”

I try to explain what gaslighting means but the best example may be right before us – trying to make someone think what they think isn’t true.

Meanwhile, across the pond, Oxford Dictionaries announced their word of the year is “goblin mode,” which has nothing to do with trick-or-treating or Halloween.

Goblin mode is defined as, “a type of behavior which is unapologetically self-indulgent, lazy, slovenly or greedy, typically in a way that rejects social norms or expectations.”

The rise in goblin mode– not bathing or grooming, binging on chips and pizza and living like a slob—is often attributed to excessive use of social media and the pandemic, all of which wonderfully illustrates the principle of goblin mode of not taking responsibility for oneself. Consistency is everything. 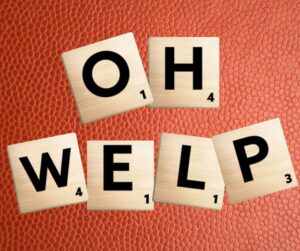 In other alpha-developments, Scrabble has added 500 new words to the official Scrabble Dictionary, including – brace yourself—proper nouns like Google and Boricua (a person from Puerto Rico by birth or descent).

Also added is “bae,” which is short for babe with a nod to those in goblin mode lacking the strength to add that second b. Oh, the exhaustion of it all.

Likewise, for those too weary to spell out adorable, “adorbs” has been entered into the Scrabble dictionary.

Another entry Scrabble is allowing, is Fauxhawk, a haircut like a Mohawk, but the hair on top is waxed and pointed toward the front of the head instead of straight up. This one (the word, not the haircut) is exciting, as it contains both a high-scoring x and k.

Another addition of interest is “welp” not to be confused with “whelp” which refers to a dog giving birth. “Welp” is a feeling of weariness and resignation, a combination of “help” and “well.”

Meanwhile, Gaslighting’s younger sibling, listening to our discussion about new words, says, “Grandma, do you know what the last word in the dictionary is?”

I had no idea.

I’ll let her have the last word.