If you have ever had water damage to your house and had giant fans hauled in to dry it out, you know what I’m talking about.

I said, “YOU KNOW WHAT I’M TALKING ABOUT!”

The noise is deafening. It’s like 747 engines at full power for takeoff, but the takeoff never ends, the roar of the engines never stops and the beverage service never comes. 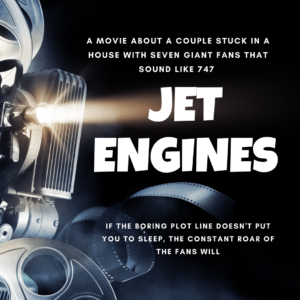 It is so like being stuck in a plane that when the husband fell asleep reading, he woke with a jolt and mumbled, “I’ll take the pretzels, please.”

I told him, “WE DON’T HAVE PRETZELS, BUT WOULD YOU LIKE A BOTTLED WATER?”

This all started when our hot water heater sprang a leak and shot pressurized water with such force that it looked like a boxer punched out the drywall in the utility closet. Naturally, the utility closet is in the center of the house. Water soaked the walls, the floor and sent the overflow gushing into the crawl space—the day before we were going out of town.

We are now in what they call “remediation.” Every time I hear that word, I flinch. I get this sick feeling that my fourth-grade teacher Mrs. Grissom finally discovered I wasn’t working up to potential and wants me to return to Boone Elementary for more long division.

On the upside, remediation (the crew that dries the house, rips up the house and then reassembles the house) has greatly improved our social life. We have 20 new BFFs. They usually arrive one or two trucks at a time, but one day four trucks lined the street. People passing by who have had similar experiences, came to the door and offered their condolences.

One friend said when their dishwasher leaked under the kitchen floor, not only did they have to battle the insurance company every step of the way, but repairs began in January and were not finished until April. Plus, they could only get to their upstairs by exiting the house and re-entering through the front door.

Another friend said when their washing machine leaked, the giant fans lived with them awhile, but they still had to rip out the floor and install replacement flooring. And it all began the week after her husband was released from the hospital following open heart surgery. They live in a small house. Jet engines roaring 24/7 at full throttle were not an enhancement to recovery.

But I ask you—IS THERE EVER A GOOD TIME?