The flash point of the Thermostat Wars happened recently when you know who cranked the thermostat, fired up a space heater in the kitchen and began fanning the door to the oven where broccoli was roasting at 400 degrees.

Overcome by intense heat, I changed into capris, a tank top and flip flops.

He countered by putting on a fleece pullover and baseball cap. 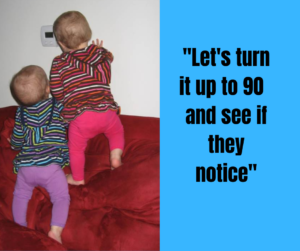 Trying to cheer my perpetually chilled husband, I remarked that the outdoor temperature had risen to 38, but “feels like” 42.

“How does a weather app know what it feels like outside?”

I suggested that the “feels like” temperatures are calculated by trained meteorologists using formulas involving temperature, humidity and wind.

He countered that the “feels like” temperatures are bogus because everybody feels temperature differently.

Then I melted because the “feels like “temperature in the kitchen was approaching 80.

The one exception to such perceived differences is in the far north states routinely blanketed with snow and cold. I know this because I lived in North Dakota one winter. Droplets of moisture on nose hairs instantly froze and made icicles when you step outside in 20-below temps. If your mouth and nose are uncovered, you can feel the burn in your lungs.

Everyone in the state agreed there was only one “feels like” temperature—that of the Arctic Circle.

How cold was it?

I was a newspaper photographer in Fargo and every picture I shot was a polar-oid. The kids all ate Ice Krispies and Frosted Flakes. I hope you believe this, so I don’t have to tell the one about all the farmers having snow plows.

Somehow, the unseen forces of Fahrenheit and Celsius predetermine that polar opposites often marry one another and then spend the rest of their lives slyly adjusting the thermostat.

My better (and partially frozen) half insists more people like a room on the warm side than the cool side. I ask to see the research and tell him there are destination spots for people like that: Florida, Arizona and California.

“The cold is invigorating,” I say.

He says no man should suffer from hypothermia in his own house.

I suggest he run in place.

He says he has been for the last 30 minutes.

He responds, “That’s because my limbs are frozen.”

The place we are most comfortable is in the car, where we have dual temperature controls. “Feels like” we may be taking a lot of road trips between now and spring.