The next time we have a family game night I’m going to phone in sick. They’re simply too exhausting. Everyone wants to play me. Grandkids jump up and down and yell, “I want to play Grandma! I’m next to play Grandma!”

They all want to play me because they can beat me. It’s the sort of popularity nobody craves.

On the upside, I have the gift of making everyone else in the room look good. 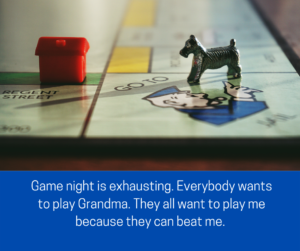 Take the game Connect Four. (Please, I beg you.) The name says it all, you connect four chips vertically, horizontally or on a diagonal. I’m guessing the box says for ages 3 and up, but I’m too humiliated to look. To my credit, I did win one round a few months ago. My opponent was age 6 and distracted by a commotion in the kitchen.

Someone commented that it’s not good sportsmanship to pump your fist in the air when you crush a 6-year-old. I’ll try to be more gracious the next time I win. Assuming there is a next time.

Monopoly? Hands down the most painful board game in the world. I don’t care about accumulating houses. I can barely take care of the one we live in now. Put me in the jail and take all my money.

Mancala is a game of strategy where you move little colored polished glass pieces around a board trying to fill your till with as many pieces possible, while also capturing your opponent’s pieces. Initially, some of the best strategists among us turned out to be the younger ones. Both a 7- and 9-year-old coached me for awhile, then decided it would be more fun to beat me.

And yet I keep playing, each time thinking, “This will be the time I win.” Hope blooms eternal. Or at least for two or three games.

We had dinner with some of the grands the other night and they mentioned they have a new game. I nearly went face down on the table at the mere suggestion.

I offered to clear the table while they played. They said no.

I offered to do the dishes. They said no again.

The game is called The How I Survived Game. A “judge” reads a dilemma from a card: “You woke up to find your mattress floating on a body of water.” “Your arms suddenly turned into spaghetti.”

It is basically a game of imagination, exaggeration and hot air. Coin after coin came my way.

Finally. A board game at which a writer can excel.

Packing up the game, I noticed the subtitle, “Where Weird and Wacky Wins.” I finally found my niche in the game market.