If you’re wondering what exciting things you can look forward to in the new year, you’ve come to the right place.

The husband sent a text to the entire family alerting them to this spectacular event, adding that he was so excited he could hardly contain himself. 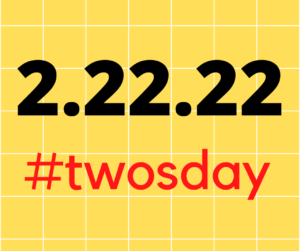 The response was underwhelming.

Eventually his Two’s Day text was acknowledged with a thumbs up, then a heart, then late in the evening came an offer to make him a pie.

I think the pie was a comfort food offer to ease the pain of others not sharing his excitement. Naturally, one would hope the pie would have two crusts filled with two very large sliced apples, baked at 200 degrees times 2.

Or perhaps the one who offered pie was thinking of Pi Day (March 14 or 3.14), which he also celebrates, as do I for obvious reasons. (Pie.)

The man can’t help himself. He is a numbers guy, a detail guy, a record-keeping guy and a history guy. When that is who you are, life doesn’t get much better than 2/22/22.

Please don’t make me spell it out. Or count it out.

As it turns out, a smattering of groups have designated February 22  as “their day” and hopefully will tailor celebrations with a nod to Two’s Day: World Spay Day (sign pets up in 2’s), World Thinking Day (distribute “Two Heads are Better Than One” buttons), National Cook a Sweet Potato Day (two at a time, please) and National Margarita Day (make it a double?).

The only people more excited than my better half are those who were born on Feb. 2, 2000 and will celebrate their 22nd birthday in 2022.

And you were thinking it was going to be a cold and dreary, long, gray winter.

Still, the possibilities for celebration are endless.

Fireworks at 2:22 a.m. and p.m. Say everything twice. Eat twice as much. Send every text twice and when you answer the phone say hello twice.

Have Tea for Two while reading a Tale of Two Cities.

For us, every day is Two’s Day.