Question: In the history of the world, has it ever been effective for one person to tell another person who is wound up to “calm down”?

Asking for a friend. 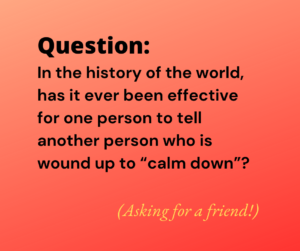 Let’s say, hypothetically, that I was wound up about something and a certain someone I have been married to for four decades tells me to “calm down.” Instead of having a calming effect, this has a polar-opposite effect. I am wound one notch tighter because I have been instructed to “calm down.”

It’s not that I mind being told to take it down a notch, it’s that the phrase “calm down” instinctively triggers adrenaline.

Perhaps other responses might be more helpful, things along the lines of “breathe” or “count to 10” or “put down the knife, now is not a good time to chop vegetables.”

I do chop fast when I’m wound tight. I’ve been known to prepare an entire veggie stir fry in under 60 seconds. In the interest of safety, I never watch the nightly news while doing meal prep.

My better half means well, just like I mean well when I tell him to calm down. Loved ones often say a lot of well-meaning things to one another that can seem, well, not so loving. Meaning well and communicating well are not the same things.

Telling me to “calm down” is on a par with telling me to relax. That one makes me want to whip out a calendar and instruct the one telling me that to block out a few days.

A son-in-law sometimes tells his wife, “Keep your powder dry.” That might be more effective because it’s a visual. It essentially says, “Don’t fire yet because things could get a lot worse.”

I am of the belief that the happiest people are often optimistic pessimists. They are the ones quietly confident that a situation can always be worse, so they are never completely taken by surprise and thereby lapse into panic.

In preparation for World War II, the Brits printed “Keep Calm and Carry On” posters intended to raise morale, fortify those stiff upper lips and encourage self-discipline. The posters were rarely displayed in public and only became widely known after someone brought several original copies to Antiques Roadshow (a program that cannot only calm but put some fast asleep).

“Keep Calm and Carry On” may have worked for the British, but unfortunately, I am not a Brit.

Fortunately, I do keep a small stash of dark chocolate.