We’re thinking about getting one of those Ring Doorbells that notify you on your cell phone every time someone is at the door. A lot of our family and friends have them. They look like a lot of fun, chiming in the background of every conversation and meal, dinging whenever a car, runner or four-year-old on a ride toy passes by.

Plus, we’ve been missing out on the thrill of huddling before a notification of someone at the door after dark, poised to call 911, then discovering it is only an Amazon delivery. A Ring doorbell could be what we need to keep our reflexes sharp.

The real reason we would get one is because our bell keeps ringing but, when we go to the door, no one is there.

Sure, we hear giggling, but we don’t see anybody. We don’t look left or right, just straight ahead like we don’t have an ounce of curiosity or a brain cell to spare.

We close the door. The bell rings again. We open it again. More laughing again. We are about to close the door again when a kid or two or three jump from behind wicker chairs and yell, “SURPRISE! Did you know it was us?” 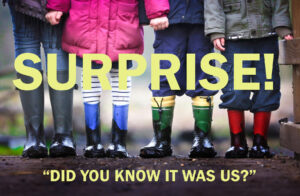 No idea. Never could have guessed. Not in a million years.

“How in the world did you kids get here?” we ask, seemingly oblivious to the minivan the size of a tank pulling into the driveway.

“All that way on those little legs?”

“You kids must be tired and very hungry.”

They hadn’t thought of it before, but now that we mentioned it.

“Come on in, we’ll get you something to eat.”

Our kids used to do the same thing to my parents who lived 500 miles away. They’d beg us to stop the car, let them out at the top of the hill and give them a head start. They’d race down the hill, ring the bell and Mom and Dad would open the door feigning shock and surprise.

“You walked all the way from Indiana to Missouri?” they’d ask.

They’d nod yes, as though we, the parents, thought that was a fine idea.

“Clear across half of Indiana, all of Illinois, through East St. Louis, across that big bridge that spans the Missouri River and all the way to Kansas City?”

It was an old gag and they never got tired of it. The kids or the grownups.

We have a couple grands who live 50 miles to the south of us and appeared at the door not long ago claiming they had walked.

“You must be exhausted,” we said.

Exhausted nothing. Their eyes danced, their faces beamed and they doubled over trying to contain laughter because they fooled their ol’ grandparents once again.

Nothing more to do at that point but open the door and get the party started.