When the husband announced we were getting a sizable tax refund this year, I froze. It was one of those moments when you remember where you were and what you were wearing. (Middle of the kitchen, black workout pants, gray hoodie – same thing I’ve worn every day since the pandemic began.)

“I know,” he said, visibly shaken.

Refunds terrify us. Not only because it means we miscalculated and overpaid estimated quarterly taxes, but because anytime we get a windfall of any sort, it is always followed by another wind. Something along the lines of a tornado. 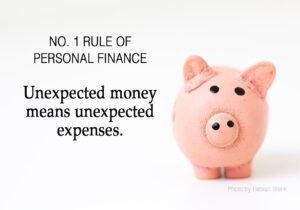 The first one hit – literally – the next week. Heavy rain turned to ice and coated all the needles on all the branches of a large white pine next to the house. Branches at the top cracked under the weight and took lower branches out with them, hurling themselves against the house then crashing to the ground. It sounded like a wrecking ball in slow-mo.

We surveyed the damage. Nearly one entire side of the tree was on the ground. Branches had dented siding, scraped brick, cracked a window frame and ripped the electrical box for the AC off the house.

“It could have been worse,” I said, which is our second rule of finance right after “unexpected money means unexpected expenses.”

The next day we bought new windshield wipers for the car. The nice man who put them on said he heard a little sing-song noise from the engine that we might want to have looked at. We took it to our mechanic who called within the hour. He said it was bad news and that we needed to take it to the dealership. “It’s gonna cost big time,” he said. “Hope you guys got a tax refund.”

That night I said, “Well, the house has spoken, the homeowners claim has been filed, the car is at a spa at the dealership enjoying two grand in the sun, but at least the appliances are all working.”

“How could you say such a thing?” the husband snapped. “You think appliances don’t have ears?”

The refrigerator let out a wicked laugh, followed by a clunk, dropping the last ice cubes we would ever see. For five days we hit the on/off switch to the ice maker and tripped the little bar. Then we bought a bag of ice from the grocery. Now, since I routinely forget to buy ice at the store, we make our own ice cubes in two blue plastic trays. We’ve gone retro.

I have a dental appointment this week. Last year, the dentist replaced two old fillings with crowns and has his eye on a third. If we go for broke on another crown, I will insist on being called “Her Majesty.” It may not stop the outflow of money, but I’ll enjoy a new title.