Years ago, Richard Simmons had a workout video series titled “Sweatin’ to the Oldies,” which featured aerobic workouts set to tunes from yesteryear.

We quit going to the gym when the pandemic began mushrooming and have been working out at home. It is a reboot of “Sweatin’ to the Oldies,” only we are the oldies.

For the bulk our cold weather home detention, we have done separate workouts at separate times, but one of our girls said she had DVD that was a good workout for men and women.

We previously heard her talk about pie-yo and pie-lo workouts and thought perhaps she had a workout with pie in mind for us. It would be a nice change of pace. 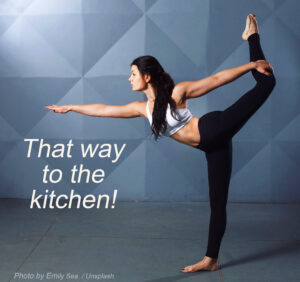 Turns out the pies she was referring to were PIYO (Pilates and yoga) and PLYO (running, jumping and dropping to the floor for push-ups) neither of which involve a fruit filling between two light and flaky crusts. The workout she gave us  contained no pie whatsoever. It was cardio intervals, recorded in a studio with a smoothie bar on the back wall. Help yourself to some kale.

So, there we were, 60-somethings doing a workout with 30-somethings. If someone made a video of us trying to keep up, we would be instant social media celebrities riding a wave of mockery and pity.

When the workout started, we initially thought the leader and several participants had surgical scars on their abdomens.

The husband deduced that they were not scars, but muscles. They were “ripped.” Ripped is what happens when you don’t just go “pie-lo” but go “pie-no.”

The workout is touted as a 21-Day Fix. We didn’t know we were broken, but whatever.

We’ve been cold weather confined so long that we’ve now done the workouts numerous times. It’s getting so routine that I can watch the Food Channel on my laptop while the workout video is on the television.

We often mute the leader and do our own narration, offering reasons as to why we slack off on certain reps before the clock runs out.

“My left knee,” I gasp. “Let’s see her do that after surgery for torn cartilage!”

The husband is lunging to the floor for push-ups, jumping back in the air, shaking the coffee table, the lamp, the sofa sleeper and lets out a whoop. “Felt that one pull on my hernia scar,” he yells.

“Well, STOP!” I gasp between breaths. “The DVDs were free, but your surgery cost thousands!”

Our favorite guy in the video series is about 35, lean and all muscle. He always grimaces and looks pained after every rep as the camera zooms in. We have decided he gets paid extra to make it look difficult.

We can make the workout look difficult without even pretending. Call us. We’re available if the price is right.