If you can overlook the motion sickness, our first online book group went well.

I came across a list of must-read children’s classics and noted “The Wind in the Willows” on the list. I started reading the book years ago and found it to be an effective sleep aid.

Now, with a long winter looming, what better time to take another run at the children’s classic, as well as a chance to socialize online with any grands who wanted to read it as well. 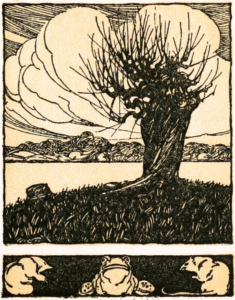 Their eagerness to start a Zoom book group was stunning. But then, I suppose the prolonged isolation of a pandemic does that to people. After a year of near nothingness, someone yells, “Hey! Want to watch me pick lint from the dryer vent?” and it’s an invitation to party.

That said, the book did have a toad, mole, rat and badger going for it.

As host, I assumed I would ask questions about plot and characters, but that was not the case. Instead, I did a lot of, “Hey! Can you kids keep that laptop steady? All that rocking and rolling and bouncing around is making me queasy!”

I suggested they set it on a table, but it is called a laptop and it turns out they are of the literal interpretation bent.

I also heard myself frequently saying, “C’mon people, get her bum away from the camera! We want to see your faces, not her diaper.”

Several pre-readers had joined, the youngest physically diving into the crowd of siblings seated on the floor with the tipsy laptop. It’s always good to see enthusiasm for reading at an early age.

I asked who would put the book on their Forever Bookshelf and nobody said a word. Nobody moved. Even the laptop held still.

I asked everyone what their favorite part of the book was, and the chatter began.

“When Toad fooled his friend and escaped from the house making a rope out of bedsheets!”

“When Toad wrecked the stolen car!”

“When Toad went to prison for stealing cars!”

“When Toad escaped from prison dressed as a washer woman!”

There I was, leading a book discussion for the juvenile delinquents of tomorrow. Concerned this might come back on me one day, I stressed that climbing out windows by tying sheets together is wrong, stealing cars is wrong, wrecking stolen cars is wrong and escaping from prison is wrong. 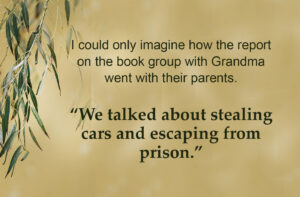 I could only imagine how the report on the book group with Grandma went with their parents.

“We talked about stealing cars and escaping from prison.”

“Yeah, and how Toad lowered himself from a bedroom window by tying bedsheets together.”

We also discussed lovely passages about drifting down the river, watching nightfall and hunting for a missing otter. We also agreed that Rat was the most admirable character, a true friend and giver of good advice, but who knows if they remembered any of that.

If not, the first book group may have been the last.