Last week I planned 24 trips. Sure, 15 were for grocery pickups, but 9 were on VRBO.

Travel planning is my latest pushback against pandemic-induced claustrophobia. We may not be leaving home, but that doesn’t mean we can’t dream of leaving home.

I’ve never covered so many miles on so little fuel.

If it’s cold outside, I view beach houses. Bright tropical palettes and palm trees swaying in the breeze call, “Come!” I can even visualize myself on the beach—tall, tanned and so incredibly thin that passersby yell, “Put some meat on those bones, lady!” 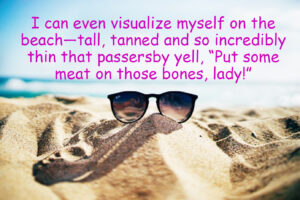 I punch in travel dates and receive a message that says 30-day minimum stay required. So much the better. It is beyond my control. They demand I stay for a month!

If it is snowing, I’m browsing majestic ski lodges made of huge timbers. That’s me by the outdoor fire pit cradling a cup of hot chocolate in my hands, all decked out in my sporty ski jacket with coordinating ski pants. I don’t have a ski outfit, but when I dream I like to include wardrobe. (And weight loss. See above paragraph.)

A lot of my travel is food-inspired. We have Italian for dinner and I’m back online teetering between Sicily, Florence and Rome. So few clicks; so many choices. Seaside escape or rolling hills of Tuscany? Do we want the villa that comes with the winery tour or the villa without?

I’m jetting around the globe with absolutely no concern that my passport is out of date.

Steaks on the grill? Say hello, dude ranch. Put me down for a dry and dusty cattle drive, mending fences and sleeping under the stars. Now checking the box for “authentic western ranch experience that comes with high-end amenities.” So you really can have it all.

If a history book puts me to sleep, I create a trip board for the place where the history happened. Why read when you can tour?

If only I could earn frequent flier miles and hotel points for sitting in front of the computer. If only vacation therapy was covered by our health insurance. “Doctor, doctor, I need some vitamin See!”

I’m not the only one doing vicarious vacation therapy. On VRBO nearly every place I’ve saved to one of my 3,000 travel boards has been viewed by 289 others in the past few hours.

Nobody’s booking, but everybody’s looking.  Much of the world now works from home and travels from home.

There are two sides to these vicarious vacations. The downside of not actually leaving home is not leaving home.

The upside of not actually leaving home is that we avoid long car trips, airport security and struggling to cram a bag that won’t quite fit into overhead storage.

That said, it would be nice to go somewhere.

I miss the little soaps.

We may soon apply for “Historic Preservation” designation.

I was making coffee the morning after some of the grands spent the night, when one asked, “What’s that thing in your hand?”

“That’s not how my dad makes coffee.”

I know that’s not how her dad makes coffee. He uses a machine where you drop in a pod, puncture it, and seconds later get coffee that puts hair on your chest like King Kong.

Known for tact (at least two or three times a year), I kindly tell her there are many ways to make coffee.

She gives me a skeptical look, then says, “Those white things in your hand are what we use for crafts.”

She thinks I’m pulling a fast one. Who can blame her? Drip-coffee makers are nearly before her time. She is growing up in the age of K-Cup, Nespresso and drive-through designer coffees.

I am not pulling a fast one and she is correct, we have soaked coffee filters in water, dropped food coloring on them and molded them into flowers when they dried. 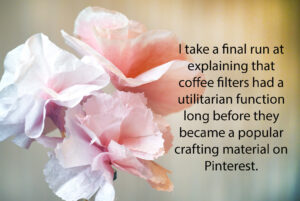 I cautiously explain the role of a filter in a slow-drip coffee maker, but she remains unconvinced. I should have taken a video of the conversation. It could have gone viral like videos of millennials trying to use rotary dial phones. They keep lifting the receiver and setting it back down attempting to reset the phone.

Fortunately, we have the rotary dial phone covered. The husband was given an ancient rotary dial phone, spray painted gold, by co-workers years ago in honor of all the long-distance calls we made to each other before we were married. 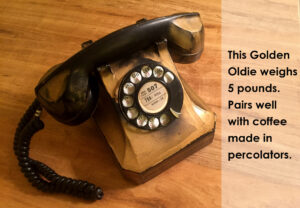 The grands all know how to dial a number on the rotary phone but would probably jump out of their skin should the thing ever be connected and let out a shrill b-r-r-r-r-ring, b-r-r-r-r-ring.

There is something endearing about explaining old technology to the young, watching their faces light up and understand how something was done before we all lived on screens. Likewise, we marvel as they explain the on/off button on the icemaker in the refrigerator and the program function on the thermostat.

The other day I overheard the husband asking one of the grands if she knew what a party line was. She was no doubt thinking along the lines of doing the Baby Shark dance with friends; he was referring to shared telephone lines once common in rural areas eons ago. I intervened saying we will explain history, but not ancient history.

I take a final run at explaining that coffee filters had a utilitarian function long before they became a popular crafting material on Pinterest. She remains leery and stands her ground. I stand mine, too. Morning blend.

One day when she is my age, she can tell the story to her grands about how her grandma used to make coffee with craft supplies.

We closed out a bank account we once used for direct deposit and no longer need. Yes, it’s a sad day when your direct deposits cease to exist. A moment of silence, please.

We went in person to the bank to close the account. For the record, it is the only time either of us have entered a bank wearing masks.

It took some time. There was a flurry of activity behind the counter as several people consulted with one another and a bank manager was sought to sign off on things. Finally, we filled out the necessary paperwork, withdrew the remainder in the account, said our goodbyes, and left the bank with two new ballpoint pens.

Several weeks later, we received an envelope in the mail, four pages in all, one piece of paper completely blank, notifying us of a balance in the closed account. 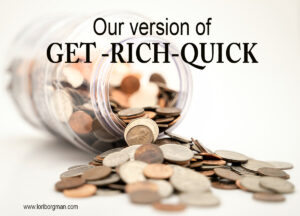 This is our version of a “get-rich-quick.”

I voted for leaving the penny just to see if it would magically spawn more pennies, but the husband said we should withdraw the “funds” if for no other reason than to spare the bank the expense of maintaining an inactive account. Agreed.

He volunteered to go to the bank to resolve the matter. Also agreed.

He was gone a very long time. The bank lobby was now closed due to an uptick in Covid cases. All transactions were conducted in the drive-through lanes with large video screens. It takes a lot longer to find the necessary people, and return to the video screen with each one, to clarify matters, as opposed to shuffling people behind a counter.

He finally returned home. Without the penny.

This was a disappointment, as I was visualizing polishing it and displaying it in a place of prominence. The bank could not release the penny to the husband because I was the one who had opened the account.

It’s intoxicating to wield such power.

I would be the one to make the withdrawal and (again) close the account.

Let’s see, three trips to the bank, four miles round trip, at government rate of 57.5 cents per mile, the penny was now worth $6.90 plus one cent face value. We were what you would call heavily invested.

We returned to the bank several days later, but not without doing hair and makeup first, knowing we would be on video—a video no doubt broadcast to the employee breakroom once word was out that the couple was back for their one cent.

The transaction was completed, the staff was sincerely apologetic, but most importantly the lighting in the drive-through was filtered and flattering, which is important when you’re on screen. Plus, if there was laughing in the background it was thoughtfully muted.

Senator Everett Dirksen is remembered for saying, “A billion here, a billion there, and pretty soon you’re talking about real money.”

That’s us. Working our way toward real money, one penny at a time.

Others apparently see us more clearly than we see ourselves, which is why we are often the recipients of free advice.

When our oldest daughter was living at home before she got married, she had so much advice for us that she designated herself our life coach. Because our life coach was engaged and about to marry, she was reading book after book on marriage and relationships. She had not yet been in a marriage, but she was a near expert on the subject.

The husband was often the subject of insights and tips offered by our life coach. He took it well, meaning he would look up, acknowledge her, shake his head and go back to what he had been doing before being interrupted.

Our life coach is now married and extremely busy coaching a family of her own. She doesn’t have much time for coaching us, but one of her daughters recently assumed that responsibility. The mantle has been passed, a very small mantle to a child who still sleeps with a stuffed bunny rabbit. 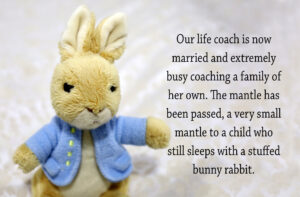 The child is concerned that her grandpa sleeps late many days. She is too young to have read any books on flexible schedules being one of the great perks of retirement and believes my husband and I need to keep the same schedule.

I explain that her grandpa and I have different circadian rhythms. She asks what cicadas have to do with sleep. I explain that a cicada is a locust, while circadian refers to patterns of sleep and wakefulness in relationship to light and darkness.

He has always been a night owl and I have always been an early morning person. If the day comes that I am not up by 5, I am probably seriously ill. Or —as I recently read in someone’s obituary— “not able to do lunch.”

Mini-coach also has it in her head that I should get her grandpa on the same schedule I am on. I did not tell her there are some who believe slightly different schedules may be the key to a happy marriage for fear she would report me to her mother, our former life coach.

Mini-coach has advised me to set every clock in the house ahead by one minute so Grandpa will think it is later than it is and get up earlier.

“Then each week, you should set every clock ahead by another minute,” she says.

Mini-coach has not done the math, because using that method, it could take four years to bring his schedule into sync with mine.

“What do I do when the clocks say it is nighttime, but it is still daylight outside?” I ask.

“Pull all the shades and keep them pulled!”

She says this with the same exasperation her mother exhibited years ago, frustrated that I am unable to reach the obvious solution to the problem.

We take our coaching under consideration; happy someone takes an interest in us and even happier that we don’t have to pay for free advice.