Once was enough on this one. Absolutely nobody is saying, “That was fun. Let’s do this again.” 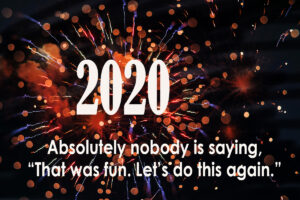 The passing year morphed into a time warp. Memories of when events happened are jumbled, out of focus and out of sequence. The benchmarks have vanished. Cancel culture cancelled life.

If someone told me that we are actually in March and St. Patrick’s Day is around the corner, I might believe them.

That will be me pinching people in January for not wearing green.

The isolation, the anxiety and the uncertainty have taken a toll.

But what if? What if 2020 wasn’t completely rotten?

What if we take the things we have learned and pull them forward?

Our neighborhood transformed under lockdown. People were out walking from the first gleam of sunrise to the last shadows of evenings. On pleasant days, the four-way stop at the corner was pedestrian congestion.

We were kind and deferential to one other. The election was still a ways off.

Stangers stopped to talk. I met a couple in their 40s who bought a house a few blocks over. They beamed announcing that they were first-time homeowners.

Kids and families rode bicycles and grown-ups and kids played ball together. There were outdoor concerts in backyards and green spaces.

Thank you. A million times, thank you.

People in every corner tried to make the best of a bad situation—there were movie nights in driveways with projectors aimed at garage doors, neighborhood scavenger hunts on social media, chalk art on sidewalks and generous tips for food service workers when restaurants reopened. At times, American ingenuity was on full display.

Granted, the year was difficult, but it wasn’t the Germans blitzing England during WWII. At least that’s what I kept telling myself. And maybe, just maybe, we gained a little perspective on the things that matter most.

I’ll never again take a welcoming hug or small soft hand in mine for granted.

I’ll never again drive by a hospital or nursing home without saying a silent prayer for all those inside.

We attended two graveside funeral services this year. We saw the grieving weeping, their hearts breaking into a thousand pieces. Every fiber of their beings longed for comfort and every fiber of our beings yearned to give it, but one cannot extend genuine human comfort from a distance of 6 feet away. When the virus is finally laid to rest, I may do a hug tour.

Far too many are grieving for loved ones. Others have lost income, jobs, businesses, homes and their futures. Many wonder if those things will ever come back.

As a young photojournalist working in Oregon years ago, I covered the explosion of Mt. St. Helens. Sprawling stands of forest that covered the mountain were stripped bare and flattened like toothpicks. Experts said the clouds of gas that exploded from the volcano and the thick layer of ash meant nothing would ever grow on the mountain again.

The following spring small green shoots peeked through the snow.

The mountain came back.