Despite pandemic restrictions on gatherings, we are still able to enjoy attending live performances. They are family productions that are affordable (free), convenient (in our own home or backyard) and we don’t have to dress up (slouching clothes are fine).

One among the brood excels at the violin and goes to town on her fiddle playing songs about dogs chasing raccoons and lonesome train whistles. Her brother may begin strumming his guitar, others strap on tap shoes and display some fancy shuffle, shuffle, step, ball change. 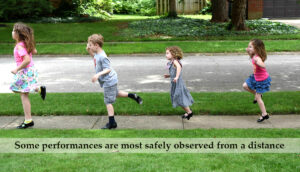 Still others begin singing or reciting poems and the overall scene looks like a three-ring circus and feels like a migraine, but who would stifle creativity?

Recently, I was invited to a dance performance presented by the eldest and youngest of three siblings. The middle sibling and I were instructed to sit on the sofa.

Then came the second directive, the likes of which I had never heard before. I’m familiar with, “silence your cell phone” and “no photography during the performance,” but this was new: “You’ll probably want to protect your legs.”

The child next to me was told to pull her legs up onto the sofa. “You probably can’t do that like she can, Grandma,” said one of the performers, “so you better watch out.”

Who doesn’t anticipate a performance that begins with “you better watch out.”

It was a fine dance performance, with a lot of running and leaping and twirling along the lines of ballets they have attended. They danced the length of the room, parallel to one another, intersecting one another and sideswiping one another.

The child next to me leaned over to explain there would be a pause in the music, but it was momentary and would not be the time to applaud. I am thankful for coaching that prevents me from social blunders.

The music paused, the dancers squared off at opposite ends of the room and nodded, indicating the grand finish was about to commence. The dancers were not well-matched physically. One is tall, lanky and built like a reed. The other is healthy and fit but looks like a rectangle next to the reed. We all look like rectangles next to the reed.

The Rectangle backed into the kitchen to get a better run at the Reed, who apparently planned on catching the Rectangle and doing an overhead lift. Yet the laws of physics dictated that should the Rectangle slam into the Reed with such force the Reed toppled backward onto the tile floor, we would all be jumping and leaping to the nearest emergency room.

The Rectangle flew past in a blur. The Reed, sensing the potential of speed compounded by mass, abandoned the overhead lift, wrapped the Rectangle in a bear hold and spun the Rectangle wildly, her legs flying outstretched through the air.

The grand finale was more Sumo wrestling than ballet, but skill is skill and no one was bleeding. Another marvelous time spent enjoying the performing arts and best of all, our legs were safe.