“Stop the show,” a grandkid says. “I have to use the bathroom.”

They are watching Jeopardy. I don’t know that they’ve ever seen Jeopardy but they are seeing it now and liking it, especially the 2-year old who seems taken with 17th Century Monarchs.

“We can’t stop the show because this is television,” a grown-up explains.

We are at a house with a television without streaming capabilities.

“Can you rewind it when I get back?”

“We can’t rewind it when you get back. It’s plain old television. 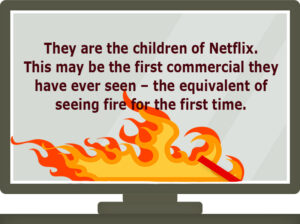 The concept of plain old television where programs play whether the timing is convenient for you or not is foreign to these kids. They are the children of Netflix and Amazon Prime.

“Can we finish watching Jeopardy after dinner?” another asks.

This is no help either.

The tekkies among us begin explaining the mechanics of old school television when something unbelievable happens. A commercial begins. There are no commercials on Netflix. This may be the first commercial some of them have ever seen – it is the equivalent of man seeing fire for the first time.

Instantly, the kids glue to the screen.

It is a commercial for Snackeez —“The all-in-one go anywhere snacking solution,” as though the ability to snack and go places at the same time is a problem in need of a solution. Somehow, I think we’ve got this one covered.

One of the kids excitedly asks if this is another television program.

An explanation commences about how commercials are time segments companies buy to advertise their products in hopes that viewers will . . . it doesn’t matter. No one is listening.

The man in the commercial is filling brightly colored Snackeez containers with beverages, then topping them with little bowls filled with chips, chicken nuggets and fries, all your basic food groups. He then rolls them on the floor, tips them over and nothing spills.

“In the car! On the go! Perfect for parties!”

A cheer goes up from the crowd.

Another cheer goes up from the crowd!

“I want a Snackeez for my birthday!” a 5-year-old yells.

Their eyes grow bigger and bigger.

“But wait! There’s more! Buy two and get two free! But wait! Buy six and get six free.”

Dinner is ready, someone clicks off the television and kids head for the table shuffling their feet because the Snackeez guy was still talking. And still hawking.

These commercial-deprived children have learned something many of us have known for a long time.

Commercials are often the best entertainment on television.