We don’t have two nickels to rub together.

We don’t even have one nickel.

We are among the growing number of people finding themselves change-challenged. Blame the pandemic. Businesses shut down, people stopped going to coin laundries, restaurants closed and piles of change often left with tips disappeared. For a brief time, even the mint than makes 17 percent of all coins shut down.

To make matters worse we are spending less and, when we do spend, we tend to use credit cards or mobile devices.

Many of us have stopped using bills and coins because they can spread germs. Just try getting Lincoln to wear a little face mask on the penny. Won’t work. The loops won’t go around his big ears. 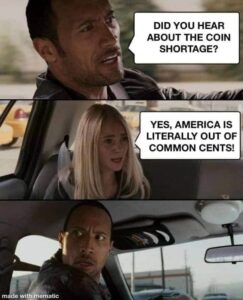 The Federal Reserve calls this coin change shortage the “slowing of circulation.” Slowing of circulation used to be something that happened exclusively to the elderly. Now it is happening to everyone. We may finally have found our common denominator as Americans.

I love change—the kind that rattles at the bottom of my purse.

I just checked the bottom of my purse and there’s no change there either. Three pieces of gum, two cough drops and the inner workings of a ballpoint pen, but no change.

The low tire pressure warning came on in the car the other day. We stopped at an air pressure machine but didn’t have six quarters between us to start it. Everybody knows money doesn’t grow on trees, which is why we shook down four grandkids in the back of the vehicle. They didn’t have any either, although two of them said they had full piggy banks at home and would gladly share.

The other two were strangely silent. They’ll do well one day as venture capitalists.

Naturally, the next step was to look under the floor mats, dig deep in the back pockets behind the driver’s seat and the passenger seat and search through the glove box. Nothing. Not one red cent. Not one thin dime.

The clerk inside the gas station was reluctant to give the husband quarters for his dollar bills, but mercifully relented.

We were not only out of change; we were close to being out of air.

A bank system in Wisconsin was so desperate for change that it offered customers a $5 bonus for every $100 in coins they brought in to exchange at a branch. That’s a 5 percent return on your money. Try finding a CD that pays that much. The program was so successful, the bank suspended it after only a week.

My parents used to keep money in the freezer for emergencies. You could always count on them for hard, cold cash.

The other day we were driving along and the husband said, “Penny for your thoughts.”

“Make that sentiment a cash offer and I’ll share them with you,” I said.

I was thinking there is a reason money is called dough.

We all knead it.